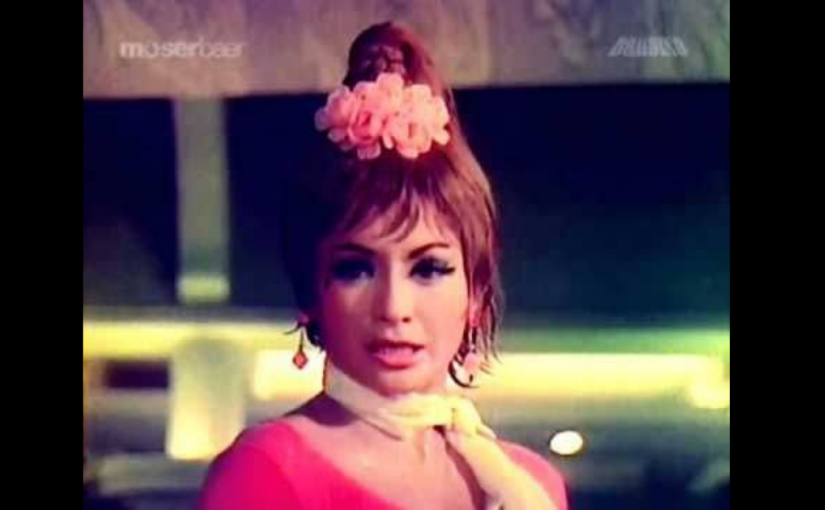 Cabaret was extremely common in Bollywood all through the 60’s, 70’s and 80’s. Originally, it was not a part of Indian culture and has travelled all the way from Europe.

These days we have item numbers. Similarly, earlier we used to have cabaret which was different because they were mostly performed in discos or bars where everyone would be seated in a particular pattern and there would be a stage in between or in the front for the dancers. Initially, the cabaret dancers would not be the lead heroine, but after a few years, the lead heroine could be seen doing Cabaret. Cuckoo and Helen were the very first dancers who broke the dance floor with their hits. Bindu, Faryal, Aruna Irani, Jayshree T, Padma Khanna and Leena Das were some of the other popular Cabaret Stars.

You all can log into the Gaana Pehchaana app to play TMK- 259 called “Before Item Songs, We Had Cabaret!”. Most of the Cabaret numbers in the game are popular and top favourites. If you fail to recognise more than 3 times, you’ll lose the game. Compete with other players and see whether you can reach the top of the Master Leaderboard or not.

Let’s read a bit about hit Cabaret songs from various decades and see how much we know about them.

“Huzure Wala Jo Ho Ijaazat” has the most perfect cabaret moves. Helen does the main dancing along with Madhumati, another yesteryear cabaret dancer. It is one of the very few black and white films with a cabaret sequence. Asha Bhosle’s singing shows why she was called the Queen of peppy dance numbers. No words for Minoo Purshottam who sings equally well. Those of you who are fond of dancing can try out these classic moves.

This song weaves a certain mystery around it. Majrooh Sultanpuri’s words and R.D Burman’s music create a thrilling atmosphere and the sweetness of Asha Bhosle’s voice adds a mix of emotions to it. Helen’s cabaret becomes a sensation. The song is such that it can be easily used to portray mystery and thriller  scenes. You’ll absolutely enjoy the beat of the congo and bongo and the chorus singing Shubhu Shubhu Shubhu Shubhu.

A super duper hit song that can still put any party to fire. “Jab Chhaye Mera Jadoo” was specially created for the climax of “Lootmaar” film produced and directed by Dev Anand.  Dev Anand can be seen hunting for the culprit throughout the song. Rajesh Roshan and Amit Khanna composed and wrote all songs for the film and as usual the Pop Queen Asha Bhosle sang it in her own glamorous style.

Parveen Babi, the lady in red slays with her killer dance moves. She has her unique way of dancing and looks absolutely stunning with Amitabh Bachchan, as he joins her to show some of his dance moves.

R.D Burman was extremely talented when it came to creating these pop numbers for Asha Bhosle. The film highlighted Amitabh Bachchan’s Angry Young Man Image in those days and was a turning point in the career of both Bachchan as well as Parveen Babi.

The bold and gorgeous Parveen Babi never fails to impress with her moves. The Raat Baaki Baat Baki moves are just epic. Elements of Giorgio Moroder’s disco track “I Feel Love” found its way into this song. The innovative Electronic sequencing with the use of four beats and the repeating vocals with synth layering make it sound so special and different. It is Bappi Lahiri, Anjaan and Asha Bhosle’s creativity that add to it’s awesomeness. Even Shashi Kapoor tried his best with the vocals.

These days cabaret numbers have been replaced by Item numbers, but still one or two typical examples of Cabaret can be seen. “Kaisi Paheli Zindagani” is one such classic example shot in a premier night club at Darjeeling. Rekha is seen doing the cabaret sequence and she does it really well. Her poise, grace and charm give a vintage appearance to the song. The part where she plays the Saxophone sounds divine. The lyrics by Kirkire, the music by Moitra and Chauhan’s singing create something very rare and unique.

Cabaret Dancers would be considered bold and daring in the 50s and 60s when these dance forms were not that common. It took a lot of effort to perform cabaret dance sequences and they were not a cheap affair. There is always a lot of demand for choreographers in Bollywood, as the entire industry thrives on dancing and singing. The storyline or plot of the films are less important than the dance sequences. The only significant change that can be seen in Bollywood dancing is that the Cabaret style has changed to Item Numbers, which are performed anywhere and everywhere, like streets, garden, terrace, hallway or theatre.

Hindi Film Music has been loved, cherished and celebrated since the 1930s or so. People love the films and the stars who act in the songs, but the directors, singers and lyricists go unnoticed. Gaana Pehchaana is a small attempt to pay tribute to them through the Musical Guessing games Teen Maar Khan, Aur Sunao, Bhagam Bhag and entertaining blogs full of rare facts, little known stories and lots of information on Bollywood Music.