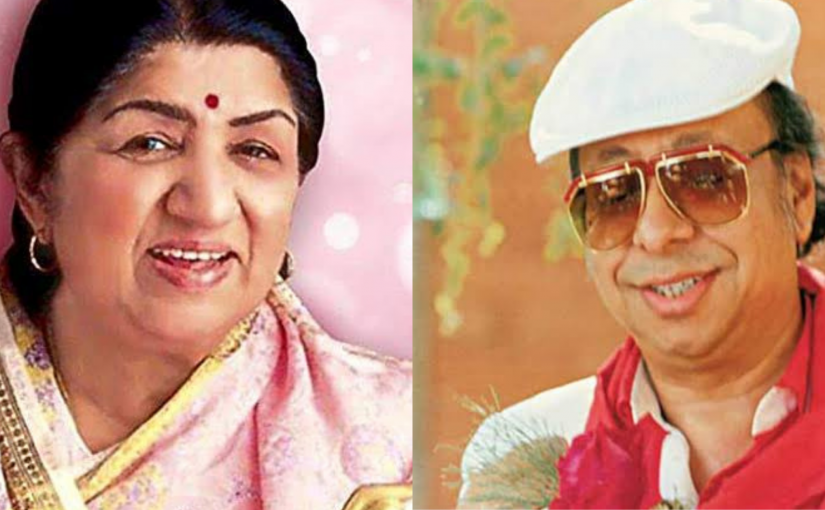 R.D Burman, our well known Pancham da walked in his father’s footsteps to become the prolific Music Director that he was. He was named Pancham by his parents because when he cried as a baby, his voice seemed to hit the 5th note.

People thought that he composed most songs in his lifetime for his Ideal and Muse Asha Bhosle, who was also his wife. Nobody is aware of the fact that he composed innumerable songs for Asha’s sister, Lata as well.

Pancham da was a pioneer who brought about new arrangements and influences from World Music into his work. His work had a lot of originality. Unlike many other Bollywood composers who lifted tunes from Western compositions without admitting, he was honest about the sources. He admitted that he was trained in Indian classical and not the Western forms, so he would take an idea from them, but change the tune according to the situation.

In today’s Gaana Pehchaana blog, we’ll discuss the special bond that R.D Burman shared with Lata Mangeshkar. He fondly called her didi and the two have created some really good songs together. This also makes them one of the finest composer-singer duos in the history of Bollywood.

Here are a few of the most well acclaimed songs by the popular duo.

This one has lots of interesting stories revolving around it. “Bada Natkhat Hai Re Krishna Kanhaiya” had already been composed by Rahul Dev Burman, when his father, the world famous music director, S.D Burman asked him to change the tune.

Film Director Samanta had asked Rahul to create music for a Bhajan situation. While he was giving final touches, Sachin Dev Burman heard it and asked him to describe the situation. When he heard the situation, he felt that Rahul was not doing complete justice to it as a composer, so he requested him to change it because here Sharmila is no more the Nauch girl that she has been playing, but her motherly instincts can be seen for the little boy even if she could never be a real mother. That agony had to be expressed, which was then done in Raag Khamaj by R.D Burman and Lata sang it perfectly without a single mistake.

“Bahon Mein Chale Aao” is always considered to be one of R.D Burman’s finest compositions. The rhythmic sound of the Duggi reverberates through the entire song, making it sound divine. It will actually be a big lie if someone says that R.D Burman did not create great compositions for Lata. Majrooh Sultanpuri must have been in a light mood when he wrote this song. Watch the all time favorite romantic number from Anamika starring Jaya Bachchan and Sanjeev Kumar, if you haven’t watched it yet and you’ll surely feel a lot more happier. 🙂

A classic number from “Aa Gale Lag Ja”, that will forever remain etched in the minds of people because of the unique composition by Burman. Even today, hundreds of reality show participants perform it.

The film had attained cult status in Algeria where it is still played at skating rinks and gymnastic shows. Lata Mangeshkar’s unique talent at performing romantic numbers like nobody else in the world made her create a history with this track. Sahir Ludhianvi crafted the best lyrics for almost all the songs from the film.

The soulful music by R.D Burman is appropriate to the situation shown in the song where a separated husband and wife meet after ages. Gulzar’s lyrics hold deep meaning and Lata Mangeshkar, Kishore Kumar dive into the soul of the characters while singing the song. It is a PERFECT R.D Burman composition for Lata Mangeshkar.

This beautiful Raga based song in Lata Mangeshkar’s voice sounds heavenly. The genre is just right for Lata’s voice as well as style, and R.D Burman knew it very well. The entire song was shot in the dazzling fort city of Mandu, situated in Madhya Pradesh.

“A composition that can never die out”!!!

Burman and Lata’s ability to analyse the situation in the film made the song starring glamorous Rekha and handsome Vinod Mehra come alive.

The 80’s Bollywood song with the most catchy music. “Tune O Rangeele Kaisa Jadu Kiya” actually does some jadu on you and you just can’t stop repeating it like a broken record player. Hema Malini and Rajesh Khanna’s chemistry takes a turn with this amazing number set in picturesque Himachal. Majrooh Sultanpuri’s lyrics and Lata Mangeshkar’s singing add to the playful nature of the song.

Why Lata and R.D Burman were the perfect singer composer duo?

It is believed that most of the melody based songs were assigned to Lata and Asha did maximum of the rhythm based songs.

Though both of them did both the kinds and the rhythm based songs made Asha a favourite amongst youngsters, R.D Burman is remembered as a great Music Director mostly because of his melody songs.

He mentioned in several of his interviews that “Lata Mangeshkar was the better singer”. In the Bombay Times Of India, dated September 29, 1985, he mentioned that “Lata Ji is Supreme”. When she sings, she forgets her identity, her likes, dislikes and everything else. Whether she agrees or not, she plays millions of different roles while singing. Sometimes, she plays a mother, at times a girlfriend, a sweetheart or a pain stricken individual in front of the microphone.

Even junior Burman had an innate talent for creating music in all kinds of weird ways, like by using glasses and spoons, rubbing sandpaper or knocking bamboo sticks, combs, shells etc.

The Gaana Pehchaana app has fun games and live gaming sessions where you can select the decade and difficulty level according to your comfort and play to your heart’s content. You need to fill a form to register for the Live Sessions. Check out our app on Android or iOS!